It’s been awhile since I’ve had time to write… I’ll blame that on the newborn currently sleeping on my chest! As you’re all aware, our sweet Ivy is here and as I’m a sucker for a good birth story, I thought I’d write hers here. I’m including all the details (mostly for myself), so feel free to skim!

So… contractions. Let’s just say I felt my first braxton hicks contraction when I was 14 weeks pregnant. They continued throughout the pregnancy, getting more intense and more frequent past 30 weeks. I started twice weekly non-stress tests the week after school got out (what perfect timing!) when I was 32 weeks. *For those of you who don’t know (because I didn’t), a non-stress test is where they hook your belly up to two monitors – one to measure the baby’s heart rate and the other to measure contractions. You just sit in a chair and relax (or watch the monitor like a crazy person if you’re me) while they monitor things. In order to pass a NST, they want the baby to move and her heart rate to accelerate 10-15 beats per minute above her average twice in twenty minutes. If it doesn’t, they continue to monitor another twenty minutes. Right off the bat, Ivy failed a NST. Her heart rate never fell, but also didn’t spike like they wanted when she moved. We did a special ultrasound called a biophysical profile where they rate the baby in certain categories like muscle tone and breathing motions. She passed the BPP with flying colors showing off with lots of movement! Well that turned into a weekly event. Pretty much for the next three weeks she would fail at least one NST and then pass the BPP. I’m pretty sure they should change the name, because those tests are definitely stressful!!!

Starting at 34 weeks, I began to have more contractions. There were a few nights where I would be up for an hour or two with contractions that were 5-7 minutes apart and definitely painful. They would always last just long enough to make me question whether Ivy was coming and steal most of my sleep! At a doctor appointment, they checked me and I was dilated to one centimeter and fifty percent effaced. At 35 weeks, they got more and more intense. There were multiple nights that I had to take a bath and bounce on my exercise ball because I was in so much pain. I almost called the doctor, but after two or three hours they would slow down and peter out. It was really starting to take a toll on me both physically and emotionally.

On the fourth of July I was 35 weeks and 5 days pregnant. I woke up frustrated because I’d been up the previous night from 2am-5am with contractions. The dance studio I teach at was going to be a part of Allendale’s Fourth of July parade, and I decided we’d walk with them and pass out candy. Zoe was so excited! I’m not sure I quite realized how hot it was outside and how hard walking a mile while super pregnant would be, but I did it! There was a part of me that was thinking if I really was in ‘pre-labor’ maybe walking would help move things along. Turns out I was right!

After the parade, we stopped home to change and pack up some things to head over to Sam’s parent’s house for the day. In the car on the way there, I started having contractions again. It was 1:00 in the afternoon. I started timing them because they seemed to be in a pattern and were pretty strong. They were coming 5-7 minutes apart. I was not ready to call it labor, but was definitely thinking it was a possibility. When we got to my in-law’s house, Sam took Zoe kayaking with her aunt and grandpa. I stayed behind and worked through contractions on an exercise ball and in the bath. After a few hours, it seemed like they were slowing a bit and were coming ten minutes apart. I was frustrated, feeling like this was just the same thing I’d been dealing with for over a week. We ate dinner, and the contractions began to pick up again. I had called the on call service at the doctor, but because I had been having contractions five to seven minutes apart, the operator wouldn’t let me talk to a doctor, just telling me to go to the hospital. Finally, I told Sam that we should probably just go in and check things out.

We arrived at the hospital around 8:00pm. The nurse checked my cervix and I was dilated to four cm. After talking to the high risk doctor, the nurse came back to administer the first round of steroid shots to help Ivy’s lungs mature as fast as possible. The doctor wanted to see if they could stop the labor by giving me fluids and then possibly administering morphine to help me sleep and my body relax (because Ivy was preterm). After an hour of fluids, my cervix had dilated to a five meaning that labor was not going to be stopped and it was time to move to the labor and delivery floor. By the time we got up to the second floor, my contractions were three minutes apart and very intense. As soon as I got in the bed, I was asking for an epidural. I don’t know how you natural birth mamas do it… I give you lots of props! I was dying and the minute that epidural started working was my favorite minute of that night (about 1:00am)! One of the attending doctors from the hospital came in to talk to me then. He said that they would not do anything to help my labor along because they wanted to try to administer the next dose of steroid shots  which needed to be 24 hours after the first dose – which would put me at being in labor for 34 hours before even getting that shot. I was feeling pretty miserable and frustrated at that point. Even though the epidural took away the pain, I was still feeling incredibly uncomfortable. I started praying for my water to break on its own to move things along. That did not exactly happen. Instead, I sat dilated to six cm for ten more hours before a doctor came back to see me. This time it was one of the doctors from the high risk office and I am a big fan of her… she definitely made me love her even more when she walked in, took one look at my face, and said “I’ll break your water!” She wanted to give me the next dose of steroids even though it had only been 12 hours and then said she’d come back around an hour after that to break my water.

At 1:05pm (24 hours after I went into active labor) she finally broke my water. I was still dilated to a six, and she said she’d see me in awhile when I was ready to deliver. Everyone left the room, and I immediately started feeling like there was a lot of pressure and I was having to hold Ivy in. I pushed the call button and the nurse came in. It was only 5 minutes after they had broken my water, and when she checked me I was fully dilated to ten cm and she said the baby was right there ready to come out! She called the doctor and I felt like I was literally clenching my muscles so she didn’t come out while they were getting things ready. With one push, Ivy entered this world at 1:19pm on July 5th, 2018! The doctor later said that all the extra fluid was keeping her head from engaging in my pelvis to cause full dilation. As soon as they got rid of the fluid by breaking my water, she was ready to come out!

Here’s me… clearly ready to be done with this whole labor thing! 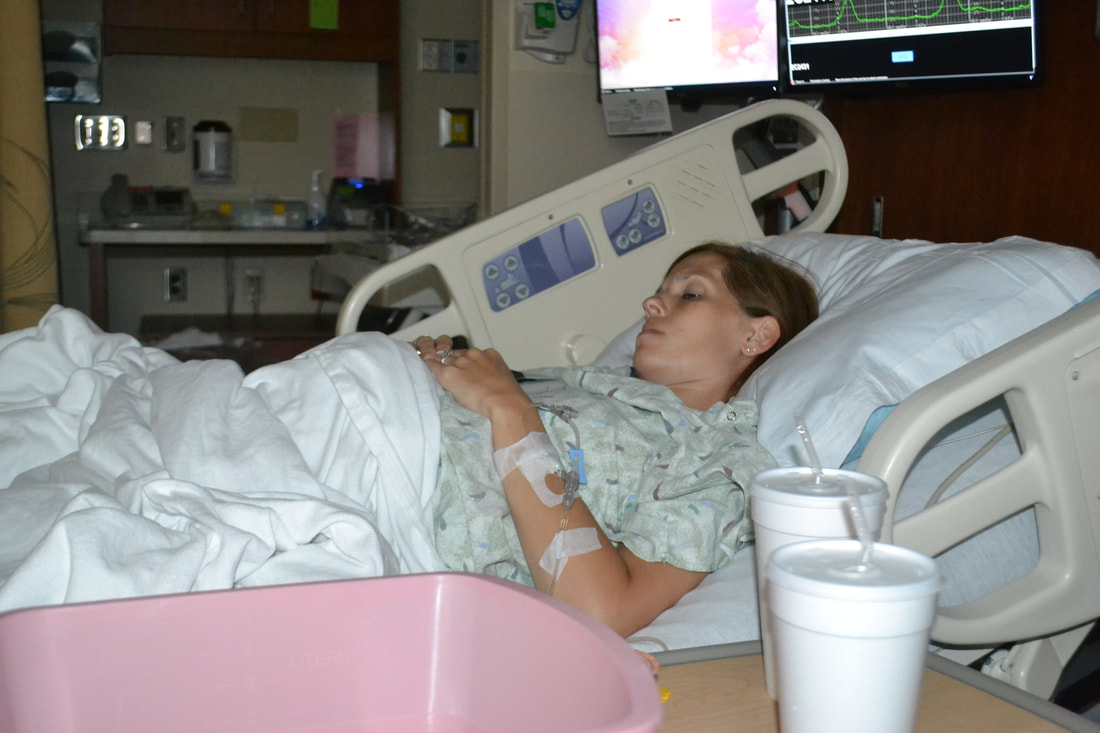